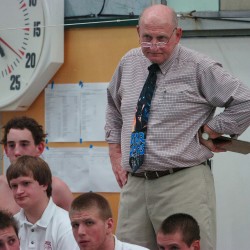 Emery began swimming for Bangor when it started its first team in 1961. He began his coaching career in 1969 for the Rams and has continued for the past 46 years.

He has received several state and national level awards for his contribution to the sport and is an inductee in the Maine Swimming Hall of Fame and the Maine Sports Hall of Fame.

Check back soon for more information about this breaking news!

This blog has been archived

This blog has been archived and is no longer being updated.